It ran more than 6,000 kilometers. It was founded during the Han Dynasty (206 BC – 220 AD). It contributed substantially in development of several of the oldest civilizations such as China, India, Persia, Europe and Arabia. It supported inter-continental trade over land for over fifteen centuries before perishing in about 1453 with the Ottoman supremacy. It made China and India the most prosperous nations at the time (see world GDP over time below). Then its disintegration caused the Europeans to find the sea route to China and India resulting in colonization and eventual demise of these two nations from prosperity to abysmal scarcity.

After more than six centuries of disuse, it is roaring back to life. Being revived by HP to run its high-tech merchandise on a 7,000 mile inter-continental journey to connect its global supply chain from China to Europe. 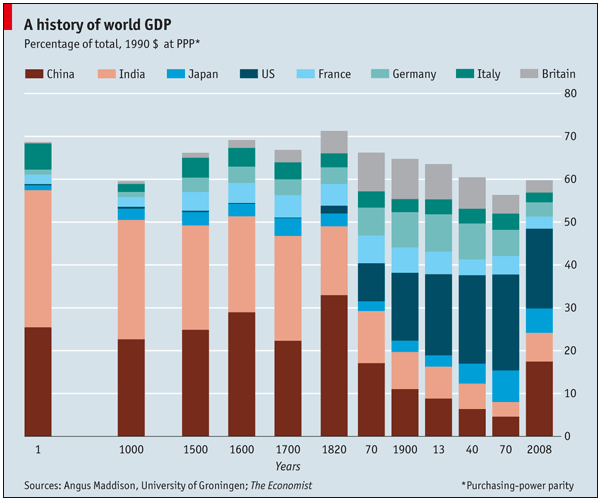 New York Times reports that, “For the last two years, the company has shipped laptops and accessories to stores in Europe with increasing frequency aboard express trains that cross Central Asia at a clip of 50 miles an hour. Initially an experiment run in summer months, H.P. is now dispatching trains on the nearly 7,000-mile route at least once a week, and up to three times a week when demand warrants. H.P. plans to ship by rail throughout the coming winter, having taken elaborate measures to protect the cargo from temperatures that can drop to 40 degrees below zero.”

Though HP may have pioneered the revival of this route, others are now jumping into the fray and making it even bigger. China has announced freight trains from Zhengzhou in central China, to Hamburg, Germany. The train route crosses China, Kazakhstan, Russia, Belarus and Poland. “The authorities said they planned 50 trains on the route next year, hauling $1 billion worth of goods; the first train this month is carrying $1.5 million worth of tires, shoes and clothes, while the trains are to bring back German electronics, construction machinery, vehicles, auto parts and medical equipment.”

DHL has started a weekly freight service from Chengdu in western China to Poland. Of course, other electronics manufacturers like HP (Asustek, for example) are also looking at these developments with interest and I am sure, evaluating their own options to take advantage of the new possibilities.

So what does the new silk road do for HP? For starters, it is mush faster than the sea-route: The sea route from China to Europe goes around India and through Suez Canal. On an average, that takes five weeks as against the train journey that takes only three weeks. It also makes the logistics planning simpler: Instead of having to truck goods from inland factories to the ports of Shenzhen or Shanghai, it allows HP to directly ship from the factories to the destination. While the sea route is still cheaper, the savings due to reduced inventory driven by reduced transit/lead-time should compensate to some extent by directly reducing the working capital otherwise stuck in inventories at sea. Reduced transit time also provides a definite benefit in short-life-cycle electronics product market. Trains also provide a cleaner transportation alternative that is more environmentally friendly compared to road or air.

The countries involved are helping too. Kazakhstan, Russia and Belarus have created new processes eliminating lengthy inspections at their borders with one another, saving transit time and enhancing cargo security. HP also helped China enhance their customs software for processing documents. “The company also negotiated special customs clearance, permitting its containers to stay locked and uninspected at border crossings along the route, although the containers are X-rayed for contraband. That was mostly to shorten the time needed for the trip….” mentions NYT.