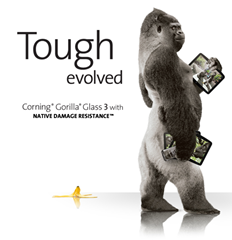 Innovation evokes passionate reactions. The term has been so overused and abused that it has become tired and a little lack-luster. However, it still remains what we are all after, because true innovation enriches life and brings prosperity to all involved! Innovation has been used to describe everything from ground-breaking research that truly advances the humanity’s understanding of the world around us (space shuttles, GPS, internet) to everyday incremental improvements in design that would be too obvious to a critical eye. No worries, I am not about to get into another definition of what innovation is or how to promote it in your organization, but I simply want to bring you a real-life story from Apple and Corning to help you make up your own minds about innovation.

In a recent Wired article, Bryan Gardiner traces the history of the beautiful glass surface that we all fell in love with when Apple introduced us to its first iPhone and changed how people would think of their phones ever after. It was a thing of beauty and the glass it adorned was just an integral part of its design and looks. While glass has always been beautiful, it has conventionally been brittle, fragile, and not so much of a choice as a popular building material for things that can easily slip and fall from our hands and pockets and go shatter!

Bryan tells the story of how Corning accidentally created this super-strong, non-brittle glass in the fifties, but had to wait until the next millennium when Steve Jobs actually needed one in a hurry! The story starts in 1952 when a Corning chemist accidentally produced high-strength glass that slipped and fell to the floor, but simply bounced instead of shattering! Quoting from Bryan’s article (emphasis is mine), “The future National Inventors Hall of Fame inductee didn’t know it, but he had just invented the first synthetic glass-ceramic, a material Corning would later dub Pyroceram. Lighter than aluminum, harder than high-carbon steel, and many times stronger than regular soda-lime glass, Pyroceram eventually found its way into everything from missile nose cones to chemistry labs. It could also be used in microwave ovens, and in 1959 Pyroceram debuted as a line of space-age serving dishes: Corningware.”

However, even with that kind of material, the project had to be finally shelved in 1971 due to lack of market demand. From Bryan, “It was a solution that would have to wait for the right problem to arise.” The project got dusted off in 2005 when Motorola released the Razr V3 with a glass-screen instead of the typical high-impact plastic prevalent at the time. And “the right problem arose” when Apple approached Corning in February 2007, suddenly demanding “massive amounts of a 1.3-mm, chemically strengthened glass—something that had never been created, much less manufactured, before.” And the rest, as they say is history, that is undeniable as proved by this quote, “Corning’s revenue from the glass has skyrocketed, from $20 million in 2007 to $700 million in 2011.”

So the lessons? If you are looking for fostering innovation in a business environment, be ready for the following: