Changing Face of Supply Chains: Where Next? 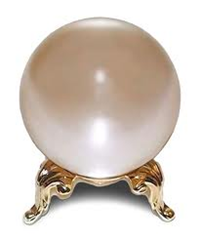 The 20th century started with the industrial revolution and then the world plunged into WWI. That was quickly followed by the great depression in the US, WWII, and then a long cold-war era between the two superpowers and with large part of the world under communism. Then towards the end of the century, things started to look up: The Soviet Union was dissolved, China introduced its market-based economic and social initiatives, India’s markets started opening up, and suddenly the world was a very different place. The effect on supply chains was profound. As the world stabilized politically, the risk of doing business diminished, and corporations were suddenly able to contemplate commerce without boundaries. The free trade agreements further facilitated the process and we saw supply chains extended across the globe. The picture below captures that image of global supply chains powerfully. 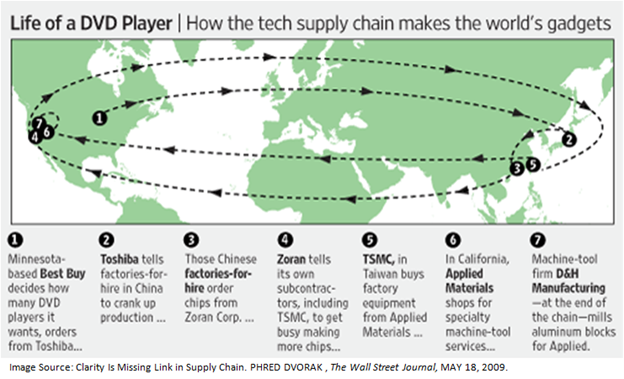 It is astonishing what a few decades of political stability can do!

China became the factory of the world and cost-cutting was the new religion. The foundation of this cost reduction for the western firms primarily lay in off-shoring and sub-contracting their manufacturing operations. The US trade charts below capture this trend, very slow until early 80s, growing through the 90s with the slope becoming ever more steep in the new millennium!

But the last few years have provided reason for the world to pause and rethink. Think of the 9/11, the tsunami in the Indian Ocean hitting several south-east Asian countries in 2004 and Japan in 2011, the earthquakes in Japan and China, floods in Malaysia, the continuing conflicts in the middle-east, and the Somali pirates disrupting the global shipping routes. To the list, add the social and economic impact of the growth of middle-class in countries like China and India creating brand-new markets for the global corporations and pushing their national GDP growth rates that are unheard of in the mature economies of the west. Finally, let us cap it with the growing political influence of China potentially changing the single-super-power world structure that has largely existed since the cold war ended.

Consider rare earth elements (REE). United States Geological Survey (USGS) identifies 16 rare earth elements (REEs). These elements are used in several applications from liquid-crystal displays for computer and television monitors to eyeglasses and permanent magnets. USGS notes that small, lightweight, high-strength REE magnets have allowed miniaturization of numerous electrical and electronic components used in appliances, audio and video equipment, computers, automobiles, communications systems, and military gear. In short, they are critical to modern life! By several estimates, more than 90 percent of the world’s deposits of REEs are in China. A New York Times article in September 2009 reported that ‘‘ . . . tighter limits on production and exports, part of a plan from the Ministry of Industry and Information Technology, would ensure China has the supply for its own technological and economic needs, and force more manufacturers to make their wares here in order to have access to the minerals,’’ and that ‘‘Beijing officials are forcing global manufacturers to move factories to China by limiting the availability of rare earths outside China.’’

So how will the world’s supply chains react to all the changes?

What technologies will enable these changes? I believe we are at the cusp of a technology revolution once again that will enable, empower, and endow the supply chains of tomorrow not only to be cost-effective, but also agile and sustainable.

If you think you have heard this before, you may be right. This is the bright future of the supply chains: Except until now it was not in the realm of commercial feasibility and now it is!

This article is based on a joint presentation by Vivek Sehgal and Chris Barnes in an APICS event held in Atlanta, GA on April 17, 2012.

Want to know more about supply chain processes and supply chain strategy? Check out my books on Supply Chain Management at Amazon.
© Vivek Sehgal, 2012, All Rights Reserved.
Posted by Vivek Sehgal at 4:13 PM