Gartner’s Top 25 supply chain list for 2011 is out. The surprises are not in who is in, but who is out! But the financial analysis proves once again that supply chain competence matters, even in a recession.

AMR introduced its top 25 supply chains list seven years ago, religiously kept intact after Gartner took over AMR. Since then, it has become kind of an annual custom. In this year’s list, all the usual suspects are intact: Apple, Dell, P&G, Wal-Mart, HP, etc. Gartner has a new name for them, they have started calling them mainstays and it figures. The new additions this year are Nestle, Starbucks, 3M and Kraft Foods: Not much of a surprise since all these are strong companies with sound management practices and effective business strategies.
The surprises were in the companies that were pushed out to make room for these four. From 2010 to 2011, Nokia, Lockheed Martin, Best Buy, and Schlumberger got the boot. The previous year (from 2009 to 2010), Toyota, Walt-Disney, TI, Publix, and Sony Ericsson were pushed out. All these companies that slid from the top 25, are also leaders in their fields and very strong performers. 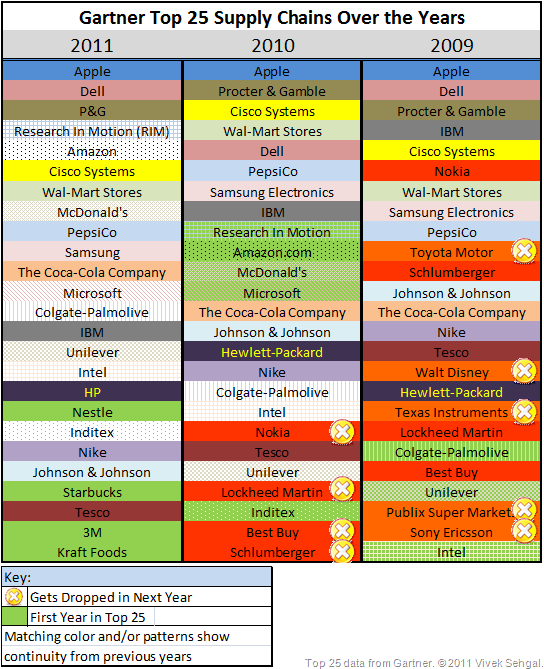 So, what is behind these companies getting knocked out from the top 25? You might believe that most of these companies simply lost focus during the last 3-4 years due to the recessionary and consumer pressures. I checked the quick financials for these companies (Google finance), and in most cases, these companies have lost considerable revenue and suffered reduced profitability. While there are obvious exceptions to this rule (for example, Lockheed Martin, which has gone from strength to strength on burgeoning defense contracts), most other companies fit the rule. However, the companies that are consistently on the list: Wal-Mart, Apple, McDonalds, Amazon have also been through the same economic environment and show similar financial trends.
But therein lies the contradiction: You would think that the companies with supply chains in top 25  list would fare much better in a recession because of their supply chain prowess (leading to their ability to have lower cost-basis and higher agility)? Well, they actually did! Even though it may not be obvious. See a quick comparison between Publix (strong supply chain, though slid from top 25) and Kroger (was never in top 25) to convince yourself: Publix revenues held much better and profitability kept the positive trend! Same is true for Wal-Mart (top 25 “mainstay”) and Best Buy (knocked down in 2011) and you see the same trend again: Wal-Mart had very less volatility in revenues & profitability compared to Best Buy.

Conclusion? Supply chain competence matters – even when it is not so obvious!
Related Articles:
© Vivek Sehgal, 2011, All Rights Reserved.