IT is Everybody’s Business 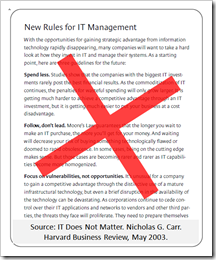 In May 2003, Harvard Business Review printed “IT Doesn’t Matter” by Nicholas G. Carr. It was wrong then and it is wrong now. IT matters. A lot. And will continue to matter for the foreseeable future. Carr’s comparison of IT with infrastructure from the industrial age just does not cut it, it never did.
Of course, the time has provided all the evidence:
Carr’s Advice, Spend Less. The reality is different, very different. Between 2003 and 2008, American corporations continued spending on technology. In fact, the US Census Bureau reports that the expenses on technology climbed up from 229 billion dollars to 296 billion dollars in five years – a jump of almost 30%. In the same time, the US GDP grew by around 28%. As a percent, the spend on technology did not go down at all, in fact, it grew albeit a little.
Why does the advice not work? Carr’s underlying argument is not faulty, when he says, “What makes a resource truly strategic – what gives it the capacity to be the basis for a sustained competitive advantage – is not ubiquity but scarcity”. But his interpretation, that because the computing technology is becoming common-place, therefore it must lose its competitive advantage, is wrong. He compares IT with the industrial age infrastructure like electric power and railways – but ignores the infinite flexibility of IT that allows you to do anything with it to create advantage – Cemex used IT to create better schedules (and hence differentiation advantage), Wal-Mart to reduce inventories ( and hence create cost advantage) and Amazon used it to create a whole new set of business-models (store-fronts, digital content publishing & selling). In fact, companies who could not manage technology are gone or are on the brink: Borders is a very real example – inability to leverage technology to adapt to the changed business landscape. Or think of Kmart – the retail behemoth that also failed partly due to its inability to leverage technology when Wal-Mart came along and things got a little competitive.
IT as an infrastructure is different from anything we have seen or experienced till now. And I am willing to bet that we have only scratched the surface of where It will take us in next 10 years, 20 years, 50 years! Think of all the technologies that exist but are not wide-spread as yet and their potential in creating competitive advantage: RFID, geo-location-based services, real-time tracking & visibility, artificial intelligence (that is almost completely absent from business applications’ decision making modules), robotics, nano-technology, advances in genetics, and so on. One day soon, there will be no need to take your groceries out and place them on a belt for a cashier to scan – RFID will take care of that as you pass through the check-out counter. Companies will be able to track their shipments, containers, and trucks in real-time as they move through the water-ways and roadways, sense real-time changes in demand, connect to the shipments-in-transit with an artificial intelligence-based decision making system redirecting and redeploying inventory, devoid of any human alerting or manipulation. Though till now, business either don’t have the ability/inclination to gather data or don’t have the capability to make good decisions with it – but a few more years of advances in computing power, mathematics, and analytics, and the petabytes of data on our shopping habits will tell retailers more about us than we know ourselves!
Think of the impact on the drug discovery and introduction, with FDA’s plans on using simulators rather than trials. Ray Kurzweil says, “It’ll soon be the case that using a simulator of human biology is a better simulation of humans than animals are. Ultimately, you’ll see very dramatic results because these are information processes. And when we really understand how the software of life works, we can really reprogram it away from cancer, away from heart disease.” (See Ray Kurzweil’s full interview at http://www.mckinseyquarterly.com/IT_growth_and_global_change_A_conversation_with_Ray_Kurzweil_2728).
Right now, the potential of IT is limited only by human ingenuity. May be some day, some day in real far future, IT may stop to matter – becoming much like the phone my desk, Carr’s comparison of IT with electricity may come to pass, but that day is not now, not tomorrow, not this decade… Till then, IT remains everyone’s business and businesses whose core strength does not include ability to manage technology can reasonably plan to retire early.
Related Articles:
© Vivek Sehgal, 2011, All Rights Reserved.

Want to know more about supply chain processes? How they work and what they afford? Check out my books on Supply Chain Management at Amazon.
Posted by Vivek Sehgal at 8:58 AM