Cost as the Dominant Business Strategy

Reducing costs as a strategy has become a primary strategy for many businesses in recent years. I believe that this trend will continue over the fore-seeable future. 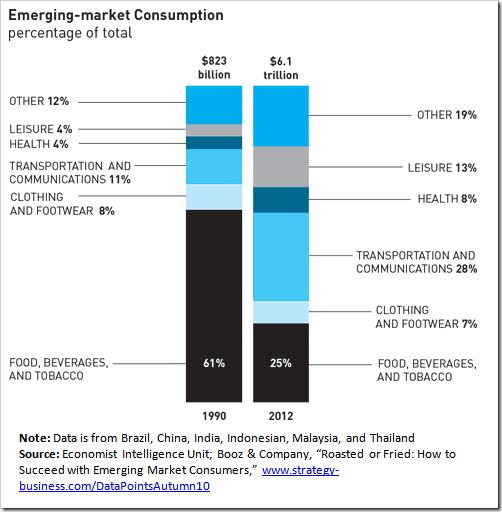 There are several reasons for this, but the most important reason is that the increasing globalization results in more and more commoditization of products that deteriorate the brand premiums and indirectly deal a blow to differentiation as a strategy. The face of this commoditization in America is Wal-Mart and its assortment of cheap functional products that address the utilitarian functions without the brand premium. But this process is not limited to America: it is widespread across the globe, with the growth of the middle class in China and India and their aspirations to match the lifestyles of developed countries at a fraction of the cost. Both of these phenomena, that of Wal-Mart driving down costs to expand its market share and of developing countries providing new markets for cheaper utilitarian products, have propelled cost as a strategy to the forefront of the three fundamental strategies suggested by Porter.

If cost is the core strategy of choice, then supply chain becomes the core business function that can help corporations realize that strategy. Examples of creating and maintaining competitive advantage through supply chain capabilities abound, with Wal-Mart being the most obvious and visible. Due to the large scope of business operations controlled by the supply chain processes, they directly control the cost of goods and hence the ability of a company to deploy cost as a strategy.

Strategy+Business published a Data-Points study, A Big Change in Emerging-market Spending showing the above trend clearly. It projects that in emerging markets percentage of total spending on essentials (food, beverages & tobacco) decreases from 61% in 1990 to 25% in 2012. During the same period, the total spend increases from a mere 823 billion dollars to 6.1 trillion dollars! That is a lot of money chasing the utilitarian products to raise the quality of life for the newly emerging middle-classes in the emerging economies (Brazil, China, India, Indonesian, Malaysia, and Thailand). And a lot of opportunities for businesses everywhere to leverage using a cost-focused strategy.