The Soft Side of the new Sears

As I had promised, here is the rest of the story on Sears Holdings. In short, the biggest culprit is high operating costs across the board including extremely poor inventory turns.

Let me explain with the help of the data below. The first set of data compares SHLD with JCP and Macy’s. Most numbers look comparable, in fact, the S&A seem to be well under control for Sears Holdings, however here is what stands out:

Just hold your thoughts while I present another set of data points, this time, comparing with Wal-mart and Target. Again, notice the highlights:

The reason for presenting the second set of data and ignoring the COGS and Gross Margin numbers, are as follows:

Ok, with the numbers behind us, there seems to be two big problems that SHLD seems to be facing:

Both of these underlying reasons do explain all the symptoms that we have seen in their financials: low ROA, low cash from operating activities, low inventory turnover, and finally the net income that is barely positive at 0.11%. Let us also not forget SHLD’s low capital investments in technology that I wrote about. These probably are a direct result of low net-income, however, they will continue to weigh heavily against their efforts to reverse the situation. 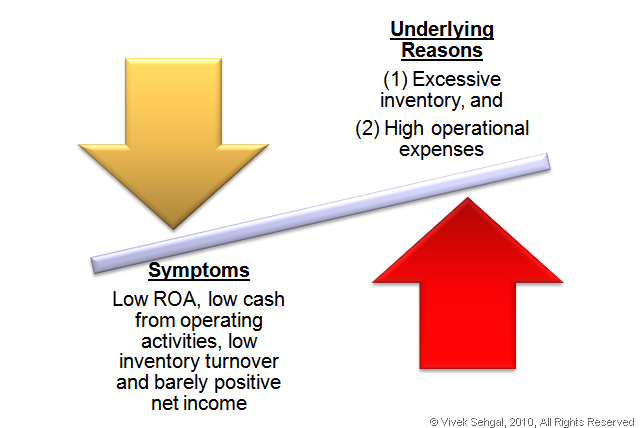 Next time: what should SHLD do? Can supply chain be the answer to their woes?