The New Sears: Too Little Too Late?

Sears Holdings announced yesterday that it currently plans to release financial results for its fiscal 2009 fourth quarter and full year on February 23, 2010, before the market opens. It will be interesting to see how their year ends.

So far though, their performance has been dismal. If you had invested a $100 in Sears in 2005, you would have lost three-quarters of that money by January 2009. The chart below is from SHLD’s form 10-K for the year ending Jan, 2009. 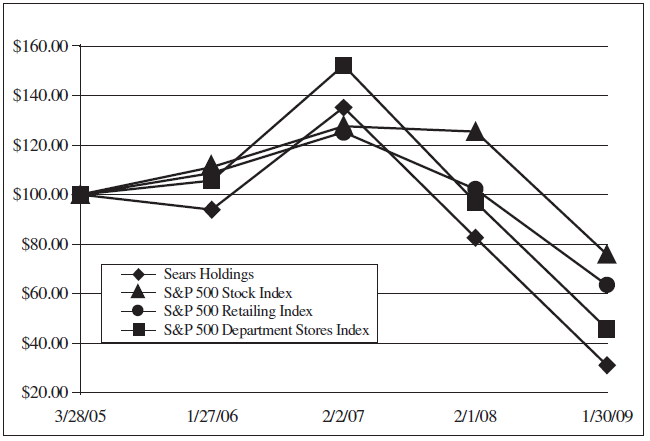 Since the merger of Sears with K-mart, Sears Holdings has charted out a plan for the merged retailer that focuses away from their brick-and-mortar stores. The strategy by itself may not be without merit, however, the planning and execution seems to be poor.

There is generally a lot of advantages that a conventional retailer can leverage when shifting their focus to online retailing. In fact, there is much more opportunity in a multi-channel retail environment rather than a single channel for retailers with broad assortments. A multi-channel retailer has the opportunity of presenting multiple ways for the customer to interact with them with each interaction having the potential for a sale. A multi-channel retailer also has the opportunity consolidate all their merchandising and supply chain assets to further reduce their owns costs to serve the end-customer whether that customer chooses to interact through an online, store, catalog, kiosk, or even a multitude of channels for a single interaction. This opportunity is lost for a retailer who is completely online – after all, you can’t buy a Kindle from Amazon and go return at a store if you did not like it. There are definite advantages associated with each of the channels and they can be leveraged through technology enabled processes that allows the customer to have a pleasant cross-channel experience and allows the corporation to spread the costs.

This seems to be a point totally lost on SHLD. The reduced investments in the stores have practically choked off customer interest/loyalty in a brand that was build over a very long time. The general message boards are abuzz with unhappy customers – the situation is very similar to the time at The Home Depot when Nardelli took over and cut all investments in stores and drastically reduced the number of associates on the floor in his effort to trim all possible expenses. Sears seems to be following a similar track. SHLD did take a leaf from Wal-mart and has started some amount of customer-facing integration between the online and retail channels, so that the customers can buy online, pick-up at a store, return an online purchase to a store, etc. It would work well if the stores were actually equipped to handle this, which requires adequate systems and people support – otherwise why would you direct your online channel customers to your stores if a pleasant interaction cannot be guaranteed? The reduced investments in the stores are bound to affect the cross-channel customer experience making it a questionable strategy.

Second, SHLD investments simply don’t seem to be aligned with their strategy. Unlike the traditional retail, where human interaction can hide a lot of process imperfections, successful online retail depends heavily on well deployed processes. These processes not only substitute the human interaction in most situations, but are also largely responsible for reduced cost overheads through automation and technology. This requires large capital investments. While the customer facing processes like product catalogs, web-based order management are important, the back-end order-fulfillment and execution processes are the ones that can make-or-break an online retail experience for the customer. Finally, the supply chain processes for planning, replenishment, and distribution directly affect the competitiveness and hence the profitability of the operations.

All of this requires targeted capital investments in the supply chain and fulfillment technologies. Retail industry, in general, lags in such investments. When you compare SHLD with its usual completion, the picture looks even bleaker: Wal-mart spends close to 1% of its revenues on information technology and Target spends around 1.5%, and it accounts for almost 25% of all their total capital investments into technology. Given their revenues, these numbers are huge and reflect these companies’ commitment in investing in technology as a competitive advantage. While SHLD does not provide specific break-up of their capital investment in technology, assuming that the same 25% of their total capital investments goes into technology, SHLD’s technology investments dwarf to only a ¼% of their revenues. In 2008, these investments look like these: $2.7B for Wal-mart, over a billion dollars for Target, and a paltry $127M for Sears (SHLD 10-K reports total capital investments of $508M without specifying the break-up, we assumed 25% of total was spent on technology, which is in line with the ratio for Wal-mart & Target). This just does not seem to be enough to create a brand-new online force in retail, given the fact that neither Sears not K-mart has ever been a leader in supply chain or merchandising technologies, which means SHLD must start building these capabilities from relatively low levels of capabilities.

While their share price has recovered substantially during 2009, partly due to the management’s decision to repurchase $500M of shares, it will be interesting to see how the year closes on February 23 on their revenues (which are still shrinking) and income which were just over 1/10 of a percent in 2008!