If NRF is Right, Not Much Holiday Cheer

International Council of Shopping Centers ("ICSC") forecasts 2009 holiday sales to increase by 1.8% over 2008.

We will know in a couple of months who was right. In the meantime, I gathered some data from the census bureau to do a little of my own analysis. 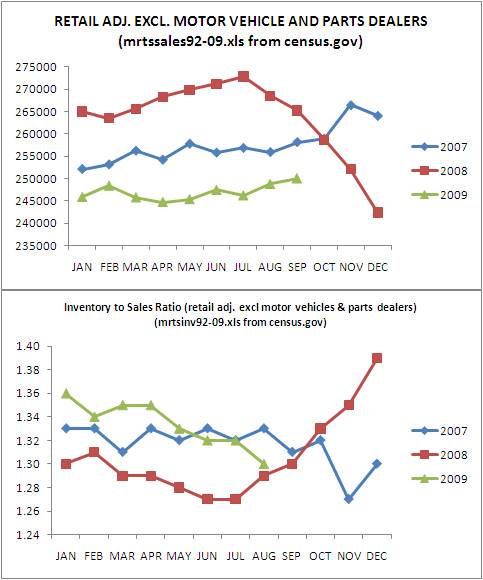 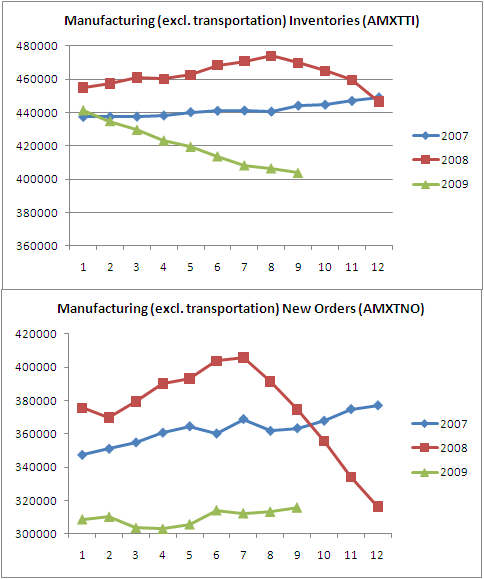 Here are the key takeaways:

So what does this all mean? If NRF forecast of lack-luster holiday sales hold, there is not much reason to assume manufacturing sector will improve either. While GDP did show signs of growth in the third quarter, it is certain that some part of this GDP growth came from the stimulus money injected into the economy, though its effect in manufacturing and retails sectors still remains to be seen. But, if ICSC is right, then the manufacturing orders will need to pick up to build up the manufacturing inventories to boost the retail inventories and support the expected increase in holiday sales.

I believe there is a good chance that the retail holiday sales this year will improve over last year rather than decline. Just like the manufacturing and retail inventories. most individuals have also consumed through their personal household "inventories" and that means that generally the spending must at least be sustained simply to support routine daily activities. Also the overall retail sales levels for 2009 are substantially lower when compared to 2007 and 2008, which would again support the "sustenance" theory. This view is also supported by the personal consumption expenditures numbers from Bureau of Economic Affairs that show a positive trend from January through September.

We will all find out the answers rather quickly. The holidays are not that far off. In the meantime, enjoy the predictions!